Coping with, and trying to understand, the tumult of India 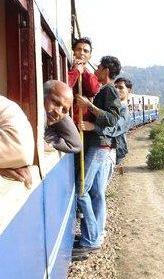 I saw this great article on the topic in the Philadelphia Inquirer and it inspired me to share a few tips of my own on getting around India: