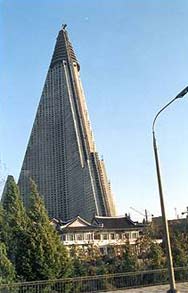 So we’ve had plenty of discussion here about the possibilities of traveling to North Korea, which are likely getting slimmer by the second, although I’ve got a hunch that Dicky C. and the boys in D.C. might have a coup in the works. I wonder if they called Hugo Chavez to critique their past performance in that department?

More importantly though, if you are able to get into the Democratic Republic of Korea, (HA!)  where are you going to stay?  As ABC News tells us, Kim and the kids over there were well on their way to constructing the world’s tallest hotel, but the project was never finished. Guess that’s what happens when the two largest items on your budget are the world’s 5th largest army to defend half of a small peninsula, and tons of helium to make sure you maintain your rep as the leader of Crazytown.