I know there are people out there who read my inaugural Snow Spot about the skiing opportunities in the Dakotas that may have responded by questioning my true understanding of the phrase ‘adventure travel.’ Well, I still stick by my pick, but this time I’ll make a pick more custom-tailored to the adrenaline junky. Just making the drive over multiple mountain passes to reach this small town in Southwestern Colorado is enough to get you pumped up, to say nothing of the town’s main attraction: a man-made ice park. 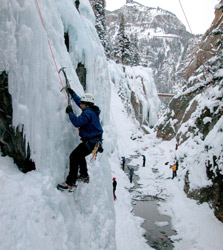 Ouray has long been known as the “Switzerland of America,” nestled among 14,000 foot peaks in a narrow valley that has kept out much of the large-scale development that typifies neighbor Telluride, on the other side of the mountain. Long a popular destination for summer and winter climbing, a few years back someone got the idea to start piping water over the cliffs in the frigid winter months, expanding the ice climbing opportunities.

That concept has evolved into the locally-owned Ouray Ice Park, home today to more than ten ice climbing areas, including the appropriately named ‘Shithouse Wall.’

The Ice Park and the yearly Ice festival competition held there have been drawing more and more international attention and climbers.

The Ouray Ice Park is preparing for a December 15th opening date.