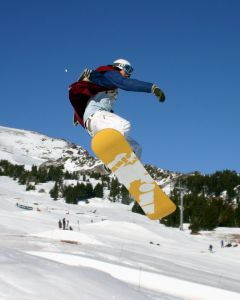 Ski Beech is the highest ski area in eastern North America. It’s a cute little resort and a good place to start out if you have never snowboarded before. The ski season is from November to Mid March. They offer day and twilight skiing, and the slopes are lit for nighttime skiing, which is quite fun.

The best thing to do if it’s your first time snowboarding and you don’t have any of your own gear is to go with the Learn-to-Snowboard Package. It comes with a lift/slope ticket, rental equipment, and a one-hour group lesson for $55. You end up saving around $10 or $15 more I think than if you did it all individually. The classes are in small groups, 10 people or so. They are quite basic, but helpful for the beginner. They teach you the basics of how to stand, stop, move, and more.

I had never been snowboarding before, but after the class, I felt ready to tackle the mountain. None of these bunny slopes for me. I figure that if you’re gonna go, go all out. So I started the day with the second hardest trails they had. As much as I wanted to go black diamond all the way, those trails were a bit intimidating. They have several mediocre trails, all of which are enjoyable. I had my fair share of busts and falls, but I enjoyed every minute of it.

The second day, I found a group of snowboarders hanging out of to the side of one of the main slopes. Some of them were locals and others were just kids on vacation. I met a few of them as soon as I showed up in the circle. They had set up a jump and were just hanging out talking and watching people do tricks of the jump. They didn’t look down on me as a newbie, which was nice. In fact, every time I attempted the jump they gave me pointers and tried to help. Its amazing the kind open spirit you get from these types of crowds. It’s not what you would expect.