Winter Adventures at Home – Skiing the Backcountry Hut to Hut 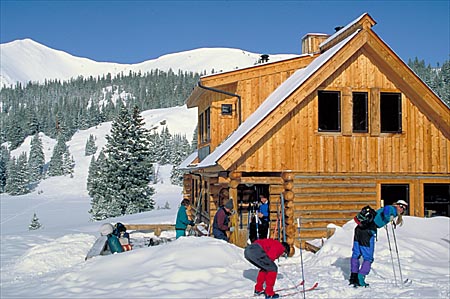 Today’s domestic winter adventure destination could be just about anywhere there’s snow and an old cabin. Ok, an old cabin where they wont mind you staying there. When I was living in Alaska there was a legend about a poor old guy who would ride many miles from his cabin via snowmobile to one of the only bars on the Yukon River. Many nights he’d have one too many and try to make it back home through the snow and dark, sometimes on the snowmobile, sometimes by foot. The legend goes that the local search and rescue team got so tired of finding this guy passed out in the snow that they built a cabin for him to pass out in around that halfway mark. Our poor alcoholic friend is long gone, but “Halfway Cabin” still stands in the middle of the Alaska wilderness for anyone to use.

That’s kind of the same idea behind the networks of backcountry huts throughout the Rockies and the Northeast, except I don’t know that any of the huts were originally built to keep drunks from freezing to death. In fact, one of the more famous backcountry hut systems was built for military training. It’s the 10th Mountain Division Hut Association, which now manages a system of 29 backcountry huts in the Colorado Rocky Mountains, connected by 350 miles of suggested routes. The “10th” provides one of Colorado’s classic winter adventures for cross-country and backcountry skiing while “roughing it” in a sometimes extreme environment. When planning your trip, remember everything must be packed in and packed back out.