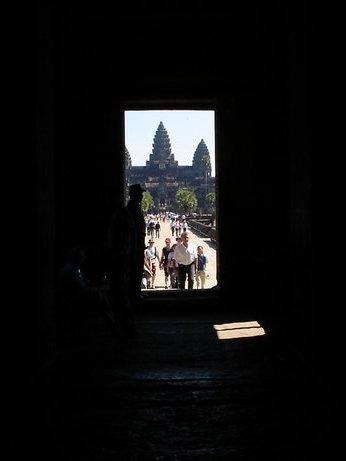 In Phnom Penh we visited a friend working with an NGO there. When I asked her about the dating scene for ex-pat guys, a forlorn look of hopeless desolation came over her face.

“There was a story I heard about one of the prostitutes who was popular with the ex-pat guys.”

I could already see a strong moral ending around the corner, but was already caught up like a deer in the headlights.
“She had come to the city to pay off the debt from her family’s new home back in the village. She was one of the clean ones just trying to make a living, never got caught up in drugs or any of the super self-destructive stuff.”

She paused to take a sip of tea, preparing for the inevitable descent into a brutally sad ending.

“So after two years of working in Phnom Penh, she finally earned enough to pay down her family’s debts and even bring back a little extra. She called her family to come pick her up and bring her back home. All the other girls threw a big going-away party. Everyone was sad to see her go but happy for her as well. Then when her family showed up…”

I was beginning to regret my decision to devote my full attention to the story at this point. It had been apparent where it would end up just by taking a look around the setting in which it was being told. We were sitting in a brightly painted café in downtown Phnom Penh. The staff was fully comprised of well-mannered, smartly-uniformed Cambodian teenagers; many of them didn’t even look that old. They were all employed by the NGO that ran the restaurant to give local street kids a sustainable alternative to more dangerous and illicit professions. There was absolutely no way that this environment would tolerate a hooker story with a happy ending. The paint would begin peeling from the wall, dishes would shatter themselves instantaneously, the crepes would certainly implode.

Just as a girl of no more than thirteen years presented us with a dessert tray, we learned that the woman in the story never went home. Her family did come to collect her earnings, and promptly sold her back to the streets. From there we turned our attention to a slice of chocolate cake. No further words were spoken about what became of the woman in the story.