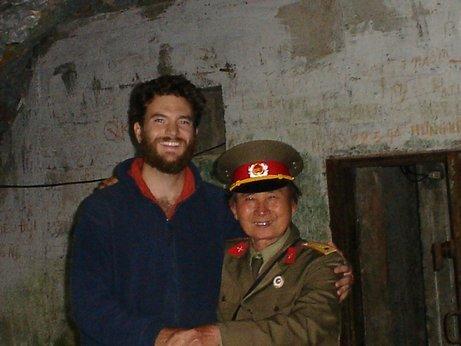 His name was Vu Dinh Khoi, a former Viet Cong Commander turned smiling, affable old man. We met at the entrance to a secluded relic from the “American War”– a multi-level bunker built into a mountain cave on an island east of Hanoi. The facility was used as a hospital for VC officers during the war. The Vietnamese government opened it to tourists a few years ago.

Before showing us around, he introduced himself by saluting us as VC officers and explained that he was honored to share his stories with Americans, something of a healing process of his own. It turns out that Vu still carries two American bullets around, permanently lodged in his head.

He shared this story with a smile, just as he would later while telling us about American planes he shot down from the top of the very mountain we were standing inside of.
These combat tales of suffering and retaliation rolled from his memory like the recounting of an insanely violent ping-pong match.

Our tour concluded with Vu ushering my fiancé, myself and our two British traveling companions into a small, empty cement room lit by a single dim bulb. Our footsteps echoed through the strange acoustics of the space and our guide asked us to line up with our backs against one of the cold walls. A brief sensation of panic could be felt coursing through all of us, up from our sandals, through our travel-worn t-shirts to the unkempt, greasy mops on top of our heads.
“Now we’re in trouble,” one of us whispered.

For a second, we all feared that we had been tricked by Vu’s elaborate rouse and were now being lined up before a one-man firing squad with a 30-year-old score to settle. Sensing our unease, Vu flashed a malicious smile from behind the room’s imposing shadow and then forcefully thrust both of his arms towards us, at the same time unleashing a Vietnamese love song in an elegant Asian vibrato that reverberated off the concrete walls in eerie beauty.

For his final number, Vu sang a sample of a Vietnamese anthem whose only discernible lyrics were the chorus: “Vietnam, Ho Chi Minh.” The march echoed around us until the single voice carried the sound of the entire Viet Cong army.