Jo (and Eric) Versus the Volcano

Earlier this week, Tuesday´s agenda included a short little jaunt up the Pacaya Volcano in southern Guatemala. It´s one of the easier climbs of the few dozen volcanoes that dot Guatemala´s highlands, and just a short 90-minute bus ride from here in Antigua. Its active status also allows for some great face time with flowing lava and chance to find out what those new hiking boots I bought before the trip are really made of…

As I´ve said countless times already, this being our honeymoon, we weren´t too hip on the idea of getting up for the sunrise climb, so we opted for the sunset jaunt instead, leaving Antigua by 3 p.m. After the bus ride we made it to the base of the Volcano in late afternoon and made the 3 (or was it 5?) kilometer hike up a dusty trail through the forest to the lava floes.

Our first vista of the cone came from quite a distance, but the quick elevation gain of the initial ascent got us to the lava fields just before sunset. 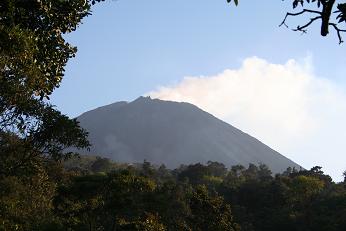 Now, I´ve often said my best guide is a good map (I´m also often lost), but if any excursion needed a knowledgable guide, it´s hiking through Cambodia´s mine-strewn backcountry. And this one is a close second. To get to the main lava flow pictured below is a good thirty minutes of scrambling over loose volcanic scree. There´s plenty of spots along the way that aren´t fully cooled and the heat raises the temperature of the air a good 30 degrees in some areas. 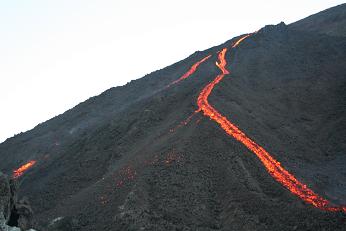 As far as I know nobody´s shoes or feet melted, but there were reports of singed leg hair from those that got too close. It´s amazing what they´ll let you do in countries without a strong influence from insurance companies.  After a hazy sunset, we braved the volcanic obstacle course again, this time with our light waning. From the base of the cone, dusk offered this final (slightly shaky time-lapse) image of Pacaya. 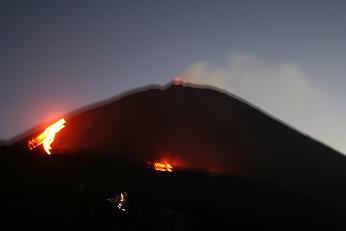 Oh, and the boots were well worth lugging across the continent.