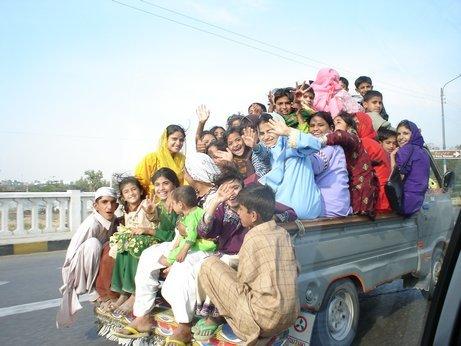 We arrived in Karachi just as the Muslim holiday of Eid ul-Adha was commencing. The four-day affair commemorates Ibrahim’s (Abraham to Christians and Jews) willingness to sacrifice his son Isma’il (Isaac) to God. Pakistanis who can afford to do so sacrifice a goat, cow or other meat animal to symbolize the event and distribute the meat to friends, family and the poor.

The prevalence of meat in Pakistan is a bit of a shock after spending so much time in India, where the beef meanders across the turning lane rather than into a slaughterhouse. But during Eid, it’s downright overwhelming.

On the final day of the holiday, most local businesses were still closed, which meant one of our hosts had to drive us to the other side of Karachi to find a working ATM not behind locked bank doors. Along the way were the leftovers of a joyous annual celebration. But rather than smashed jack-o’lanterns or discarded Christmas trees dragged to the curb, we drove past countless piles of entrails, heads, legs and all other variety of livestock remains.

In front of a shuttered bakery, a large pile of cattle stomachs and other organs was neatly wrapped and tied into a bundle by what was previously the animal’s small intestines. On another corner, a decapitated bull head grinned at us from behind the evidence of what was clearly a pretty bad day. In areas where the holiday remains had just been put out, blood literally ran in the streets. Local dogs were celebrating on their own festive terms with an endless supply of bones and fur-on goat legs.

Driving past, I remember being thankful that it was a dry heat in Pakistan. Then I began to be a little concerned that I wouldn’t make it through what ever sort of meat kebabs our hosts would be offering up for dinner after witnessing the local processing techniques. When we walked in the door back at their home, our hostess had a phone in her hand:

“Maybe I’ll do veggie tonight,” I replied sheepishly, trying to disguise my relief.

That holiday meal taught me the true meaning of Thanksgiving. What was I most thankful for? The FDA.