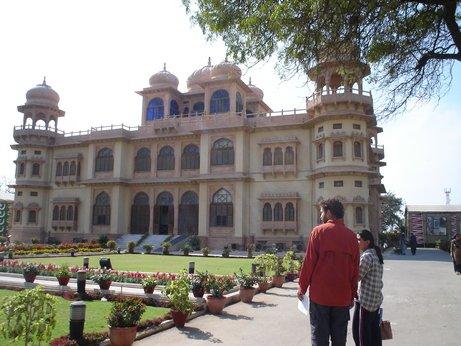 The drive from the Karachi International Airport to the upper-class neighborhood hidden behind mazes of perimeter walls and armed guards passes near both the coast on one side and seemingly endless dusty slums on the other side. Although near the heart of the city, the streets don’t appear to be paved, a few signs and storefronts dot each street, but they look as though they were all erected in the early 20th century and never maintained a day beyond. Children kick rocks in the street, and even from a distance, atop the relative safety and comfort of a raised freeway looking down into the sunniest patch of desert gloom I’ve ever seen, it looks just plain sad. The curve of the streets makes it appear as though this city is locked in a frown of chaos.

Just moments ago, we were greeted by Rasheed, a man that was employed by some friends of ours as their personal driver. Over the next few weeks, Rasheed would escort us anywhere we needed to go. Our hosts were concerned about two pasty white Americans roaming around the city alone, so he served as our driver, tour guide and interpreter, despite the fact that he didn’t seem to speak much English.

We were visiting Karachi to attend the wedding of one of my wife’s college friends. The couple lives and works in Dubai, bot both were originally from here. Their families were considered “middle caste,” what might be considered upper middle class in the US. Our friend’s father had made a good living as a geologist, and it allowed for his children to attend university in New York, as well as a nice home in a nice neighborhood not far from the ocean, a cook, maid and Rasheed.

Rasheed and the cook lived in a small living quarters behind the house. It wasn’t much different from some of the living quarters in the slums we passe earlier but it was in a much nicer neighborhood, and Rasheed was a man about town in the family car. Needless to say, he wasn’t complaining….