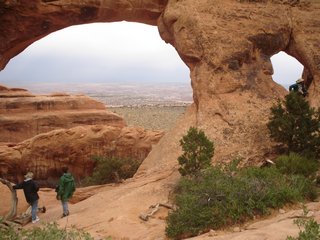 Picking up where I left off yesterday, we hit Arches National Park first thing in the morning and headed straight for the Delicate Arch. We took in one of the park’s finest spectacles from the viewpoint after opting to take a pass on the crowded, 10-mile round-trip hike out to the Arch itself.

From there we headed out to the Devil’s Garden to hike out to the world’s largest, the Landscape Arch and points beyond. After taking in the slowly collapsing majesty of the Landscape (a huge chunk fell off of one side in 1991) we left the beaten path to take in a different view from atop a rock fin behind the Arch. Read on to see the pics.

From there, we pushed on down the trail towards the Double O Arch, despite the dark stormclouds heading right for us. Stubbornly, we pointed our compass for a collision course with the thunderheads in front of us. Probably not the best decision considering the path to Double O leads over one of the higher points in the area, a quarter mile walk over the top of a sandstone rock fin overlooking the valley and other formations below.

Just as we finally reached the Double O, the skies opened up, deluging us with an onslaught of hail, rain, thunder and lightning. Rather than pushing our luck by running across the top of wet slickrock through violent lightning, we sought refuge in a crevice between two slabs of sandstone. When we emerged, we had the back end of the park seemingly to ourselves.

Enough blathering, check out the show: