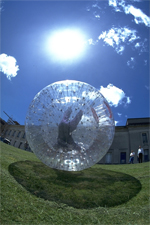 What’s the most fun you can have with a kiwi? Well, yes they do work just as well in a potato gun, but I think we’ve all grown past that. And I’m talking about the grown-up Kiwis, as in New Zealanders.Those crazy folks from down under and just to the right are the creators of Zorbing, which you’ve probably seen on some obscure cable channel at some point. It involves crawling into a human size hamster ball and rolling yourself down large hills. Sound like fun, but maybe a little bit stupid?

All the Zorbing pros assure us that Zorbing is completely safe. The Zorb is a transparent and inflatable mass of PVC plastic, so you may want to avoid rolling down inclines with any jagged boulders. You may also want to avoid eating before hand.

Zorbers are usually either strapped into the inside of the sphere for the ride, or occassionally, the interior is filled with a layer of water for more of a waterslide experience.

Zorbing parks have spread to many places in Europe, as well as China and Argentina. Here in the states, an official Zorb park is set to open in Boulder City, Nevada, not far from Las Vegas and in the Smoky Mountains of Tennessee.