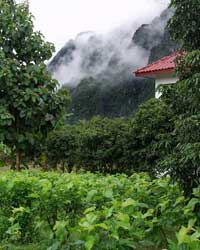 For a few weeks now, I’ve been sharing one of my asian adventures with you in a series of posts called $24 and 24 hours to Hanoi. As you’ve probably gathered by now, I’m a bit meticulous about notetaking on my travels. So I can not only break down for you how we spent those 24 hours, but I can also tell you what we spent our cash on while in Laos that left us (the woman who is now my wife and I) with only $24 to our name just as our visa expired far from the nearest ATM. You’d think for all my meticulousness, I would have been able to see this situation coming, but you’ll have to talk to my wife about that problem….

1. Laos (as of 2005) does not have any ATMs that are connected to international networks (there may be one or two in Luang Prabang and Vientiane by now).
2. We were in the 5th month of our travels at this point; we had long since run out of travelers’ checks and found that ATMs were the safest and most reliable way to access funds (argue about the wisdom of this approach in the comment section below).
3. The name of the game became finding a balance between how much cash we would need for our few weeks (our visa was for 15 days or less) in the ATM wasteland of Laos, and how much we felt comfortable carrying around on us.

So with all that in mind, we settled on $600 to get us (two people sharing accomodations) from Bangkok through 10-15 days Laos and on to the next international ATM in Hanoi. As it turns out, we were so enamored with the organic farm where we stayed in the village of Phoudindaeng, that we ended up staying there 8 nights, stretching both our visas and our cash reserve to the limit. So here’s our budget breakdown for two days in the capital city of Vientiane, eight on the farm, two in Luang Prabang, two exploring the Plain of Jars, and one to get to Vietnam. Keep in mind again that the figures below are for two travelers sharing a room:
Overnight train, meals and taxi from Bangkok to Laos border: $70
Laos 15-Day Tourist Visas (2): $63
Lodging – $5/night in Vientiane and Phoudindaeng; $10/night in Luang Prabang; $3/night in Phonsavan (Plain of Jars) = $76
Transportation – (including bus rides, rickshaws, taxis and transport from border all the way to Hanoi) $108
Incidentals/Activities – (essentials, gifts, batteries, short-wave radio, Plain of Jars tour, river tour, etc…) $120
Food – (including plenty of Beer Lao and rice whiskey) $163

We were completely broke when we flagged down a rickshaw driver to take us from the bus station to the bank in Hanoi. That’s either budgeting perfection or cutting it way too close. Either way we lived to tell the tale without sleeping on the streets, but we did sleep on more than one crowded bus.

Next time: Wedding Bells in Pakistan