Danger is my Middle (East) Name 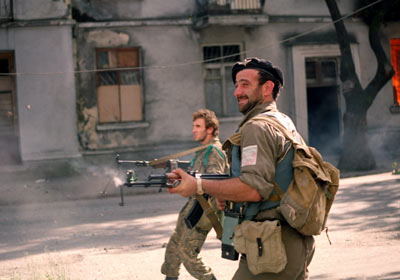 Sticking to the loose theme of unsettled areas that we began with my posts on the situation in Oaxaca, the folks at the UK Telegraph also seem to agree that there are many Tourists unafraid of trouble spots. They point to the continued popularity of Egypt despite hotel bombings there. But this has to make me wonder what constitutes a ‘trouble spot.’ I haven’t heard many people refer to London, Oklahoma City, Washington, D.C. or New York City as places that are ‘dangerous to travel to,’ even though all have a history of bombings.

On the Forbes list of the Ten Most Dangerous Travel Destinations from 2003, all of the locales are far, far away from the perceived safety of western countries. I’ve been to at least a few of the countries on the list, and I’m definitely a coward when it comes to things like guns, terrorism and kidnappings, but I had absolutely no problems there, as an traveler with some basic street smarts should. By the way, ever had people tell you that you need ‘street smarts’ when traveling to New York or D.C.? Right, well, adjust for social, cultural and political differences, and walking down the street in Karachi is just the same as the Bronx. We need to get teh folks at Forbes to broaden their horizons a bit.

So where is dangerous nowadays? Well, take a look at the map on Robert Young Pelton’s comebackalive.com site (He’s the author of The World’s Most Dangerous Places and a consummate adventure / danger junkie) and you’ll find that only Colombia, Iraq, Lebanon, Israel and the Palestinian Territories light up in the bright red that indicates a trip there might be your last. Although my Israeli friends and experiences tell me that the street smarts rule is pretty much in effect there when there’s no Katyusha Rockets raining down on the country.

But as always, I recommend tracking down the most up to date information for a country from people on the ground there before you go. Start with the forums right here at BootsnAll or check out the BlackFlagCafe.