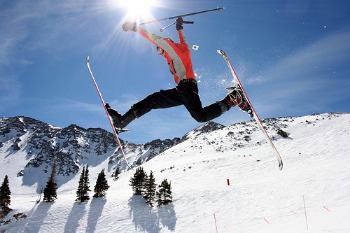 While some of us might lament the passing of fall and the arrival of the cold temperatures that bring snow, at least one group of people rejoice in the coming of the fluffy white stuff – skiers.

If you’re an avid skier or snowboarder, you’re probably already searching the internet for the best ski travel deals of the season, shopping for the best ski goggles and breaking out your favorite ski parka in preparation for another season of hitting the slopes. And there are lots of great deals to be had, especially just before and after the holidays, when most people aren’t thinking of planning a ski resort vacation. If you can get away, you can score some great discounts, and have the slopes nearly to yourself.

If you don’t live as close to a winter ski resort as you’d like, or if you just can’t get away for the next few months, you can still indulge your love of skiing or snowboarding, even after the spring thaw has rendered most North American mountains a muddy mess. It’s nearly always ski season around the world at some point, so while we’re basking in the summer sun in the northern hemisphere, you can be speeding down the slopes in the south.