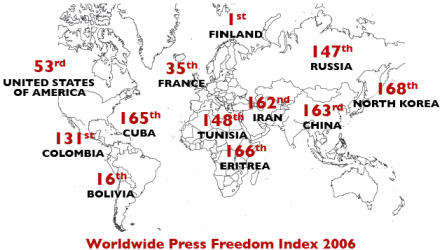 This should be of interest to both reporters and travelers. There is almost always a direct correlation between how free a country’s press is and how easy it will be for you to move around a country safely. Not surprisingly, European countries make up all of the top 15 spots. Former eastern bloc nations have soared up into the top ten, while major powers like France, Japan and the good ol’ U.S. of A have begun to slip. America has fallen from a one-time ranking of #17 to #53 this year. Just a few of the countries that ranked higher than the US: Bosnia and Herzegovina, Ghana, Bulgaria, Mali, Panama, El Salvador and South Africa. Bolivia and Canada are the highest ranked non-European countries, tied at 16. Here’s what Reporters sans frontières had to say about the latest findings:

“Unfortunately nothing has changed in the countries that are the worst predators of press freedom,” the organisation said, “and journalists in North Korea, Eritrea, Turkmenistan, Cuba, Burma and China are still risking their life or imprisonment for trying to keep us informed. These situations are extremely serious and it is urgent that leaders of these countries accept criticism and stop routinely cracking down on the media so harshly.

“Each year new countries in less-developed parts of the world move up the Index to positions above some European countries or the United States. This is good news and shows once again that, even though very poor, countries can be very observant of freedom of expression. Meanwhile the steady erosion of press freedom in the United States, France and Japan is extremely alarming,” Reporters Without Borders said.

The three worst violators of free expression – North Korea, bottom of the Index at 168th place, Turkmenistan (167th) and Eritrea (166th) – have clamped down further. The torture death of Turkmenistan journalist Ogulsapar Muradova shows that the country’s leader, “President-for-Life” Separmurad Nyazov, is willing to use extreme violence against those who dare to criticise him. Reporters Without Borders is also extremely concerned about a number of Eritrean journalists who have been imprisoned in secret for more than five years. The all-powerful North Korean leader, Kim Jong-il, also continues to totally control the media.”