Reader Submission via Send Us Your Story
By: Chris Turner 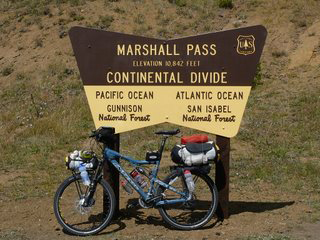 Fifteen miles north of the US-Mexico border crossing at Antelope Wells, NM, my front tire started losing air. Usually this is a run of the mill distraction for any regular cyclist. But when you are on the 110th mile of a 125 mile day, which just happens to be the last and 61st day of an over 2800 mile solo mountain bike tour from Canada to Mexico, you get a little excited.

But life was good, and I was touring the Great Divide Mountain Bike Route. Established in the mid 1990’s by The Adventure Cycling Association, the GDMBR is the longest off-pavement bike route in the world. The northern terminus is Banff, AB, Canada and the southern most point is Antelope Wells, NM. The route is tied geographically with the North American Continental Divide; prompting the rider to cross this feature 30 times and gain over 200,000 feet of elevation. The official distance is 2711 miles and the route is 90% off paved roads. The GDMBR can be ridden northbound or southbound, with some traveling select sections only. Although it’s hard to determine, consensus is that no more than about 30-40 multinational cyclists attempt the entire thru-route each year.

Going on a Journey, Eh?
I flew into Calgary and shuttled to Canmore, Alberta prior to biking up the westbound Trans Canadian Highway to picturesque Banff. The official northernmost point of the Route is located at the Spray River Trailhead, just south of the Banff Springs Hotel. From the trailhead, Canada quickly went from civilized to wild, with dramatic glacier carved mountain valleys, lush green vegetation, and a string of mountain lakes complementing the series of single track trails and provincial forest roads. At Elk Pass, I crossed the Divide for the first time and passed into a very remote and thickly vegetated area of British Colombia. Grizzlies were a definite concern, so care had to be taken when traveling and camping. Elk, moose, beaver, and a compliment of other wildlife were always out and about, rarely noticing my presence.

Montana Huckleberry Hunters
Civilization picked up somewhat as I passed into the mining country of southeast British Columbia and meandered down through the Fernie area, ultimately crossing the US/Canadian border at Roosville, MT. I almost immediately climbed into the phenomenal Montana backcountry, which in addition to being very rugged; was a place where grizzly bears and a small population of humans compete for the fruit of the Huckleberry bush. The route pops of out of Montana and cameos in Idaho along an old rail bed that in its day, delivered tourists to Yellowstone. Entering Montana between Yellowstone and Teton National Parks proved to be a challenge as one of the few highway sections on the route was clogged with tourists trying to capture in a few minutes what had been my whole world for several weeks. A long but beautiful descent off of Union Pass dropped me into Pinedale, WY and the next phase of the journey.

The Divide Basin
While most of us typify the Continental Divide as a remote and wild range of mountains, this isn’t always the case. The GDMBR follows the Divide as it splits into a unique, large and vast alpine desert basin feature, known as the Great Divide Basin in south central Wyoming. Biking through this otherworldly area is a huge contrast to what came before and what followed…with vast open, isolated spaces with little surface water. Trees and other people were a welcome sight as I passed out of southern Wyoming and into Northern Colorado.

Colorado and New Mexico
The fall change was just starting as I biked into the Steamboat Springs area, headed south to cross over the Colorado River and eventually pass through the resort town of Breckenridge. The next river crossing, the whitewater rafting popular Arkansas, occurred near Salida, CO before tackling the above 10,000 feet series of passes that began with Marshall Pass (10,842 ft) and topped out at Indiana Pass (11,910 ft.) The elevation gain/loss didn’t let up in the rugged and rough trailed mountains of Northern New Mexico, where a viewpoint on the Brazos Ridge offered stunning views of the Sangre De Cristos to the east.

After riding the majority of the route solo, I was lucky to meet up with some Oregon-based riders in central New Mexico. The route carried us through some varied terrain that ranged from yucca/cactus alpine desert, to natural arches, to high elevation pinon/pine forests and deposited us in Pie Town, NM…famous for one thing, of which we ate plenty. I continued on through southern New Mexico, staging for the 125 mile push to the border in eclectic Silver City.

Viva la Mexico!
After all that way, all the beauty, the colorful characters, the challenges, the twenty five pounds of weight I lost, and almost having to change a flat with the border in sight; all that was waiting at the border (other than my ride home) was a few buildings with some barking dogs. The border crossing was closed, Hours 8AM-4PM. But that was fine, whoever said the trip was about the destination.