One of the main reasons most travelers choose to visit Africa is her wildlife parks and conservancies. These are certainly the highlight of any African trip, and here is the BootsnAll top ten choice of African wildlife destinations. 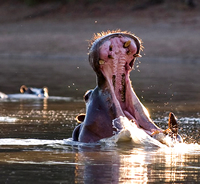 10 – Mana Pools Zimbabwe: These days Mana Pools is a little bit of a forgotten backwater on the African eco-travel map. The recent history of Zimbabwe has tended to isolate it from the mainstream which has done very little to help the conservation effort.

Mana is unique because it is different. The park is situated on 2500 square kilometers on the south bank of the Zambezi River. The area is a mix of riverine habitat rich in crocodile and hippo, floodplains supporting large herds of herbivores and a back-country of low lying Mopane woodland interspersed with thousands of mature baobabs.

The diversity of wildlife and scenic interest is just one of the reasons why Mana Pools should be a tick on your map of southern African eco destinations.

9 – Gorongosa Mozambique: This park, situated in north central Mozambique, is one of the region’s oldest and most troubled conservancies. Once the jewel of the colonial Portuguese conservation effort, and denuded almost to extinction during Mozambique’s series of civil wars, it is now one of the most visitable parks in the region.

Also of mixed habitat, the vortex of the park is a wet depression that supports a rich variety of vegetation that in turn provides succor and habitat to a huge diversity of wildlife. To the west lies Mount Gorongosa with its large number of endemics and unusual forest habitat. To the east wooded Miombo hill country offers shaded sanctuary to the more elusive of the African plains species.

Slowly being restocked, Gorongosa is still a work in progress, but is the focus of much international money and interest, and for the moment seems to have an assured future.

8 – South Luangwa Zambia: One of the principal watersheds of this large southern African nation is the Luangwa River which runs north to south along the east of the country, flowing ultimately into the great Zambezi. A significant section of the river frontage is reserved under the protection of two national parks. The North and South Luangwa National Parks are allied but different, and of the two it is South Luangwa that is the more popular.

Covering an area of 4636 square kilometers of the river’s east bank, South Luangwa offers a mix of riverine and floodplain habitat with high cliffs and forested hilltops. The park supports excellent wildlife diversity and offers the option of walking safaris.

This park is fairly new to the circuit, but is easily accessible, well maintained and protected, and served with excellent lodge and camp hospitality options.

7-Kruger National Park South Africa: This is one of Africa’s flagship wildlife destinations and one that sets the bar extremely high in the matter of wildlife conservation, breeding, research and study. As a consequence it can seem a little overdeveloped although the up-side is that all you ever hoped to see of African wildlife and more will be found here.

Kruger is an authentic bushveld destination with wooded savanna and acacia thornveld being the predominant habitats. This is also quintessential big game country where you can be justly disappointed if you do not regularly bump into the Big Five.

Easily accessible, well funded and managed, and exceptionally well and efficiently served with all the necessary amenities. This is a great option for beginners. It is civilized bundu-bashing in a developed-world atmosphere.

6 – Khalaghadi TransFrontier Conservation Area South Africa: This is another of South Africa‘s superbly run national parks. Linked under international treaty (the Peace Parks Foundation) with Botswana, the combination of two enormous wilderness preserves in the Central Kalahari has opened up a vast an uninhibited safari area for those equipped for rough travel.

The better traveled region of the park is easily accessible and in a desert and semi-desert environment some of the signature scenery of Africa can be enjoyed from the deck of a luxury camp or lodge. Penetrate deeper into the wilderness and you can park your Landrover under a baobab and neither see or hear another human being for weeks.

A great option for enthusiasts, second timers and expedition junkies. Expect to see the Big Five with many other more localized or endemic species.

5 – Masai Mara Kenya: This is the sister park to the iconic Serengeti National Park and is a continuation of the same broad eco-zone. The annual migration of antelope species in astonishing numbers that define the region usually begins and ends in the Masai Mara. This is one of Kenya’s signature wildlife destinations so it is both heavily visited and carefully controlled.

However the inevitable jostle at certain times of the years is compensated for by one of Africa’s most Eden-like landscapes replete with natural splendor. Masai Mara is large – some 25 000 square kilometers – and is composed mostly of open grasslands and plains. The justly famous East African hospitality industry reaches its zenith in places like the Masai Mara so expect some of the highest standards of luxury on the planet.

4 – Etosha Pan Namibia: Namibia is one of the most celebrated safari destinations in Africa. With a sparse population and all the wide open spaces a body can absorb, this is wild Africa with a very civilized underbelly. Etosha Pan is in a dry and unforgiving corner of the continent but despite that it is one of the most rewarding of the regional eco-destinations to visit.

Well managed, isolated and well protected this expanse of bushveld surrounding a seldom flooded pan enjoys unique ecological perspectives as well as all the best of African game safaris. The Namibians are excellent at long range 4×4 adventure, so for a little outlay an authentic African safari adventure is there for the taking.

Very wild and very real, this park is nonetheless easy to get to, easy to see and comfortable in the grand colonial tradition. Practical for all budgets. You can get the best and the most basic here.

3 – W National Park Niger: This park scores the highest points in Africa for interest. Very few eco-travelers ambulating the continent with binoculars in hand ever give much thought to West Africa. This is thanks mainly to the popular perception of teeming populations and very limited surviving natural heritage. Across most of the region this is true, but at the thee corners of Niger, Benin and Burkina Faso a unique configuration of river and land has been preserved as the W-National Park, a responsibility nominally shared between these three countries.

This regional conservancy covers some 10 000 square kilometers of largely uninhabited territory dominated by the delta of the Mekrou River with the Niger River. It is broken by rocky hills and expanses of bushveld. Equally unexpected wildlife encounters are frequent here with one of the last surviving populations of West African elephant and rare West African giraffe. Also expect to see cheetah, Lion and leopard with possible sighting of African painted wild-dog. Besides this there are many antelope species. W-National Park is a sought after birding destination.

So all in all an unusual eco-travel option with a frontier feel since facilities are scarce and access tricky. It is worth the effort though as Africa’s number 3 option.

2 – Okavango Delta Botswana: This is the Eden of the south. One of very few international inland deltas, the Okavango is a product of the Okavango River finding no outlet to the sea but instead spilling into the Kalahari desert and creating a vast and spectacular oasis that is home to some of Africa’s most unusual and prolific wildlife destinations.

The Delta is not wholly protected and is technically an area of mixed usage. Human habitation is present but limited, and on the whole the region is given over to wildlife. The main area of national park is Moremi Game Reserve which links in the north with Chobe National Park. Both are among the most important eco-destinations in the region.

Both parks have a riverine/riparian aspect with access by dugout and other river-craft. With generally superb standards of game management throughout Botswana you can expect to see the best of the Big Five and much more besides.

The usual way to get the best of the Northern Circuit is a climb/safari packages that taxes your physical endurance and then soothes it with a relaxing safari among some of the greatest natural treasures in the world, and among some of the most esteemed representatives of the global hospitality industry.

In every respect the eco-travel potential in this region is superb. Although budget travel is not really encouraged, it is possible, but it is only when you dig deep in your pocket and spoil yourself with luxury that you will get the best that this region has to offer.

Features include the annual migration that takes place between the Masai Mara and the Serengeti every year. If you are lucky enough to catch this you will have witnessed one of the world’s greatest natural phenomenon