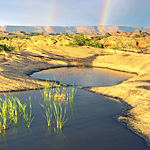 After spending a full day in Arches National Park it became fully apparent that we had not planned enough time to fully explore Moab and surroundings, a task that could easily take a lifetime – just ask Ed Abbey. We were going to have to choose between putting rubber to rock on the famed Slickrock Trail or exploring the martian landscape of Canyonlands National Park. We chose Canyonlands, a park that would soon prove to be a cruel tease, offering a glimpse into a world that would require a dozen more trips to even begin to experience.
If I’m sounding a tad dramatic here, believe me, it’s well deserved. From atop a mesa, we were able to look down on another geologic world, comparable to the Grand Canyon, only weirder. From above we were able to glimpse a dozen or more excursions I’ve filed away for the future. Old mining roads lead down the side of the canyon walls and across the desert into some of the most remote and primitive areas in the country like ‘the Maze.’

Once in the Maze, you’re totally on your own, there are no real resources of any kind. Visitors rarely find it worthwhile to spend any less than three days testing their self-sufficiency among the other-worldly formations. Any takers for an excursion at a future date?

Check out these shots looking down on the Canyonlands: